The latest model of the Ford Motor Company, the Ford Puma returned as a compact, urban Crossover. The name derives directly from the previous Puma from 1997 – 2002, which was based on the Ford Fiesta. That’s how it happened also this time. Previously, the car was presented only on the Ford scene in the dark, now we know all its details. Interested?

Crossover – All this is due to the changing trend in the automotive market. Since 2018, the sales of SUVs and Crossovers have increased by 19% on the European market. These results translate into the introduction of new models as the Active family: Ford Focus Active, Ford Fiesta Active, Ford KA + Active. The SUV family includes Ford EcoSport, Ford Kuga, Ford Edge, Ford Ranger and Ford Active Range. The new Puma will be a model between Ford EcoSport and Kuga, and rivals of this model on the market will certainly be Renault Captur, Nissan Juke and Peugeot 2008.

Cheerful and smiling new Ford looks like someone just bought him the most-awaited gadget on the market. This amusing front with a large air intake and bulging lamps is positively received by fans of the blue oval.

The vehicle contains the latest technologies that will interest many gadgeteers. Compact and urban proportions with raised position behind the wheel and in combination with SUV elements – it is a Crossover – the trend of recent years. Puma Crossover will be available in Zetec, Style, Titanium and ST-Line versions. Packages will vary, among others:

Puma will be driven among others by new engines from the range of mild hybrids. Gasoline, 3-cylinder 1.0L EcoBoost Hybrid 48V engine with 155 hp, EcoBoost 1.0L with 125 hp. Diesel engine with 1.5L capacity in 120 hp version.Puma can be equipped with a 6-speed manual transmission or 7-speed automatic transmission.
Higher design of the car allowed to get the largest luggage capacity in this class of cars! The 456-liter luggage compartment is additionally equipped with an 80-liter storage compartment, where we can fit several plants to garden or even put a folding bicycle in it.

The new Puma will be produced in a 5-door version, which will be 46 mm longer, 54 mm higher and 71 mm wider compared to the Ford Fiesta 8 generation, which was the platform for Puma.

Inside you will find a SYNC3 console with an 8-inch display, at an additional cost, the offer will include Apple CarPlay and Android Auto, Wi-Fi hotspot for up to 10 devices, Bang & Olufsen sound system with 10 speakers. In addition, the car can be equipped with seats with 3-step massage intensity, removable and washable seat covers, inductive charging and 2 USB slots.

The old Ford Puma collected many awards and dripped with fame. In 1997, after being shown, Puma became the car of the year in Top Gear, in 2004 in the What Car? magazine was described as the best sports car below £ 10,000. 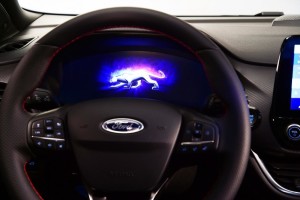 The new Puma will be available from the end of this year in Ford Stores. Prices can start from about £ 20,000 (around 24,900 $). Will it just as well satisfy the market as its predecessor from 17 years ago?