End of waiting for the new Ford Focus RS. We already know the look and we know what we’ll find under the hood of the blue beast. Ford confirmed our speculations about 4WD, engine capacity of 2.3-liter EcoBoost and power over 320 horsepower.

February 3 Ford prepared the premiere of the RS 2015 in Cologne, Germany, in which could not miss a great SHOW. Show began with a presentation of the flagship models of Ford (Capri RS, Escort RS, RS200, Sierra RS Cosworth and all previous generations Focus RS mk1, mk2, RS500). At the end Ken Block drove to the studio in the latest generation Focus RS mk3 giving a demonstration of skills and capabilities of this model Ford.

Below you can see the full video from the premiere: 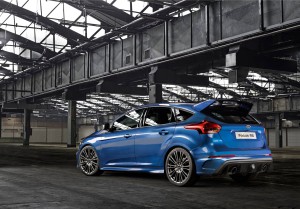 The newest version of the Focus with the legendary RS emblem probably will go on sale at the end of 2015. This model of Ford will mainly be strong competition for his rivals, who are growing in strength. When the model will appear in stores, its estimated price is about 30 thousand pounds.

What is the greatest sensation? 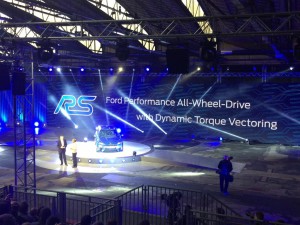 We have no doubt, the greatest sensation is a drive to all four wheels (AWD). Through the introduction this technology, the Ford Focus RS can stand compete with major rivals such as the Audi RS3 or Mercedes A 45 AMG. The system of Focus RS is analyzed 100 times per second the situation on the road, in this way system controls the four-wheel drive. This ensures maximum grip and the greatest power onto the road pavement. According to the Ford’s information this system allows up to 70% of power to be sent to the rear wheels with as much as 100% of that driving torque sent to one wheel.

2.3 EcoBoost engine straight out of the Mustang

Under the hood Ford placed turbocharged engine with a capacity of 2.3 liters, which will occur this year in the Ford Mustang. The power that we can have in this four-cylinder engine is more than 320 hp, a red lines will achieve at 6800 rpm. Focus will be equipped with six-speed manual gearbox. CO2 emissions will be about 20% less than its predecessor RS second generation.

By adding new elements to the body kit, such as large rear spoiler, diffuser and dedicated a new front bumper, which allows to achieve even better results in aerodynamics. By reducing the resistance, and the introduction of new components significantly influences the grip and improves driving the new Ford Focus RS. 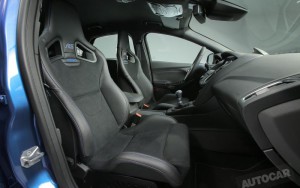 As we mentioned at the beginning, the price of the model will oscillate around 30 thousand pounds, equipped car for this price you will find most of the elements of the titanium version and a few dedicated components such as 19-inch alloy wheels with giant Brembo brakes. Of course, we also find Recaro sports seats both front and rear. 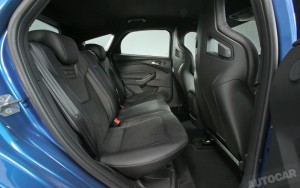 Heads of Ford has also confirmed that the car shown in the pictures in color Liquid Blue was the only color to the show, but they promise to introduce a new blue color named Nitrous Blue, which will be similar. The choice we have colors such as gray (Stealth Grey), black (Absolute Black) and white (Frozen White). Unfortunately, the green color (Ultimate Green) known from the second generation Ford Focus RS was rejected.

Market gap that must be fill by Ford’s product

The new Ford Focus RS is the latest model of cars known as HotHatch that are a compromise between compact and sports cars with great power and high performance potential. Over the next few months, the Ford Focus RS will challenge competition such as: