The new, 4th generation of Ford Focus is a new styling that refers to the latest Ford Fiesta 2017 model.

At the beginning of this year, the first spy pictures were released during tests of the camouflaged mk4 Focus, after which it was difficult to deduce the appearance. Current and the latest photos show the car entirely with the hashtag #TimeToFocus, which will certainly be the slogan of the Ford advertising campaign.

The new, fresh design and shape of the body you can see at a glance. Ford Motor Company followed the latest automotive trends of other brands. At the front of the car you can see a new shape of lamps equipped with LED headlights and grill with chrome stripes, which significantly differs from the previous generation, above all it is higher. In the Focus, you will find fog lights under the main headlights. LED lights are also mounted on the back, which are more durable and more visible.

Interior of the new Ford Focus 2018

The project will refer to the latest, eighth generation of Ford Fiesta presented this year. This exclusive design will certainly continue for the next few years. We anticipate that the interior will be more orderly, a large number of buttons will be replaced with a centrally located, large touch screen on the center console, which will serve as an on-board computer, a source of entertainment and navigation – an infotainment system.

The Ford Focus 2018 has more and more competition in its class. Currently refreshed models of Opel Astra, Renault Megane and Peugeot 308 are becoming even more popular than ever before. This time, to the fight for the status of an urban car also includes vehicles from the new CrossOver segment such as Seat Ateca, Kia Stonic, Opel Crossland X.

Times are changing, cars are getting newer and equipped with new technologies. The designers are competing with their projects and novelties in the global battle for new models, and above all they are fighting for the client. Will Ford continue to lead the European market? We are waiting for your comments! 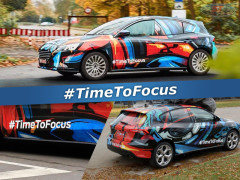